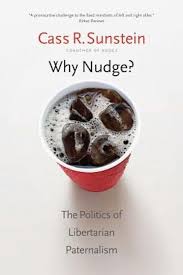 Book review: Why Nudge? The Politics of Libertarian Paternalism

Earlier we posted a review about Nudge. Nudging is the designing of choice architecture in such a fashion as to steer individuals into making a rational choice, while still preserving their liberty to choose in whatever way they see fit. In Nudge Thaler and Sunstein dealt several critiques to their approach. However, the book created other critique within the scientific community which pertained to the influence of nudging on themes such as liberty, autonomy and human dignity. In order to counter these critiques Sunstein wrote Why Nudge? in which he defends both libertarian paternalism in general and the practice of nudging specifically.

Governmental paternalism occurs when the government “overrides people’s choices on the ground that their choices will not promote their own welfare”. Thus, the government exercises some power over its citizens in order to change their actions. The main problem which such a practice is that it infringes a person’ right to liberty, that is the freedom to make his own choices. John Stuart Mill, the 19th century philosopher, was radically opposed to any form of paternalism. In his essay On liberty he wrote that “the only purpose for which power may be rightfully exercised over any member of a civilized community, against his will, is to prevent harm to others. His own good, either physical or mental, is not a sufficient warrant. … Over himself, over his own body and mind, the individual is sovereign”. This is Mill Liberty Principle, which is based on the reasoning that every individual knows what is best for him. Thus, any intervention in an individuals’ decision by another actor would lead to a result that is worse, compared to when the individual would remain free to decide.

Sunstein counters this argument by pointing out that the individuals themselves oft do not know what is best for them. Among other biases and forms of faulty reasoning he points out that people tend to overvalue rewards that they can attain directly, make unrealistic forecasts for their future and are prone to overestimating the chance of certain events happening based on the ease with which they can recall such an event happening (e.g. people tend to overvalue the occurrence of terrorism or plane crashes due to their extensive news coverage). Humans are thus often not rational at all and could thus use a little help in selecting their optimal choices.

Furthermore, Sunstein offers clear boundaries to the paternalism that he would allow the government to carry out. Firstly, it must be a form of soft paternalism, in which there is no material cost imposed on the individual should he wish to choose differently. Secondly the paternalism must alter the means of people and not their ends. Thus, people should be steered into choosing better ways of achieving the goal they wish to achieve. Sunstein is opposed to trying to change the very goals themselves which people pursue and would, like Mill, only allow such forms of paternalism when those goals would harm others.

In the rest of the book, Sunstein deals with other objections to libertarian paternalism. He paradoxically shows that the steering of choices by the government or others might even boost personal freedom and autonomy. This is due to the fact that many decisions in the everyday life have already been made by others (e.g. what does an alarm clock sound like, how can airplanes be designed or how traffic should be regulated, etc.). This choice delegation allows us to live in a highly complex society without having to worry ourselves over (often) boring and trivial issues. If we would have to make all of these decisions ourselves than we would not be able to function at all and could not truly live our lives to the fullest. The same applies for nudging, which allows us to make quick and efficient decisions so that we can use time for the more enjoyable things in life.

Finally, some practical concerns with regard to libertarian paternalism are introduced. Sunstein argues that the government should be completely transparent towards its citizens about its use of nudging and other forms of libertarian paternalism. Furthermore, citizens should be able to revise their choices quickly at any time in order to make sure that the government cannot abuse its power with regard to the choices of its citizens.

Why Nudge? is a very enjoyable book that presents the reader with several compelling arguments about why both nudging and libertarian paternalism are effective ways of improving the welfare of people without infringing on their rights to liberty, autonomy and freedom of choice. Sunstein writes in a clear and well-structured manner that makes the book easy to understand both for those with or without any background knowledge on nudging or paternalism.

Book review: Nudge     Book review: The better angels of our nature
We use cookies to ensure that we give you the best experience on our website. If you continue to use this site we will assume that you are happy with it.OkPrivacy policy